The Namibian climate ambassadors Alexander Brock und Nandi Merdes have been selected by the international youth initiative YouThinkGreen to represent the youth at this important event.

Seven billion people on this planet and one big challenge: our future – YOUR future.

For this reason delegates from all over the world come together every year to make a change in the battle against climate change. This year’s COP, so called Conference of  Parties, will be next week in Doha, in  Kathar. The first one was 1995 and on the third one in 1997 the Kyoto protocol was installed. But since then decision makers from all over the world keep talking and talking and doing NOTHING.

Thanks to a lot of money by big oil and big cooperation’s, the world today is a much worse place than it was in 1995. People at these climate conferences don’t make a move, they don’t WANT to make a change because they are too worried about their own assets and their financial wealth. But this year’s COP is going to be different. This year they will be told by young people what they think of their stalling, their not taking action. 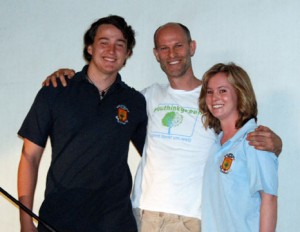 This year YOUTHinkGreen is sending 11 young climate ambassadors to Doha to take part in the conference of parties.

Alexander Brock and Nandi Merdes have been selected to represent the youth at this year’s climate talks.

But why these two? You might ask. As you might know there are more then 20 students active in our YOUTHinkGreen initiative at DHPS.

Nandi participated in a creativity competition where the students were asked to use art to express their expectations for this year’s conference. 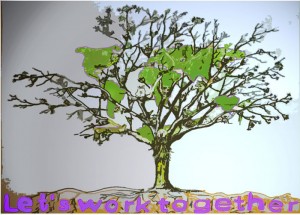 Nandi ‘s artwork was selected as a winner together with 9 others from all over the world.

Nandi received an accreditation from the Namibian government. That mean she ‘s going to Doha as an official member of the Namibian delegation.

Alexander didn’t take place in the art competition. So why is he going?

The second ticket was given to a very keen and motivated YouThinkGreener. Due to his motivated engagement in the group Alexander had been selected two months earlier by Volkswagen to go to New York and participate in the event ‘OneYoungWorld’, a conference for young future leaders. But because he wasn’t 18 years old at the time, this exciting opportunity was taken away from him in a very cruel way in the last minute.

Alexander will be taking part in COY 18, which stands for Conference of Youth. An event where he’ll meet thousands of other, similar minded, enthusiastic young people from all over the world – all fighting for the same goal: A better future for all of us.

Both will be leaving on 22nd of Novemvber and return on the 1st of December.

If you are interested to read what these two youngsters had to say after they came back, you can read their report here.