And touchdown, we had finally landed after a 17 hour long journey. It felt like we had landed on another planet: huge unusually shaped high-rise buildings, not much colour except for beiges and blues (no green) , camels standing in the middle of town and people hooting in front of a shop so that the owner brings them the cigarettes to the car. Yet still quite similar to our own country in many ways.

It was the first time for both of us to take part in a conference the scale and dimension of this and thus everything was bizarre and strange. It was the first time that the Conference of parties was to be held in the Middle East and therefore we weren’t the only ones trying to adapt to the new traditions i.e. the dress code, the food and the daily prayers from the mosques six times a day. We saw some extreme wastage of water and electricity, such as having the streetlamps on during a sunny day and lawns being watered at the hottest point of the day. Everyone drove fancy sports cars or huge 4x4s, which were simple to run in a country where the fuel price is only 2R/L – No wonder that Qatar is the biggest CO2 producer per capita.

Obviously everyone then asked why the COP18, a conference about climate change, was being held in Doha. Mr. Jean-Pascal van Ypersele, the Chairman of IPCC explained to me, that they choose their venues purposefully to make climate change a global issue.  He informed us that it is important to include all countries.  Hosting this event could mean a dynamic movement towards sustainable living in such locations.

At the COY8 , Conference of youth, we had our spirits lifted meeting people with the same ideas, same way of thinking and with the same enthusiasm. While the COY8 the youths split into working groups, which dealt with different aspects of the Kyoto-Protocol.
Nandi: I decided to take part in the Educational field also called Article 6. I worked together with six  young adults for better rules and regulations of climate change education in the school curriculum.

In my opinion, the biggest global problem is, that the foundation of knowledge about all the aspects of climate change is missing in the curriculum of us, the today’s youth.  To build up this foundation people need to get educated. To make people support their government for a healthy planet – a greener future.  To dealing with climate change has to become a topic in our daily lives.  In response to this, the parties with greener ideas will get more attention and support from the community.

Alex: I decided to join the group that dealt with technology transfer, because it is an aspect which effects developing countries the most. I discovered that the Kyoto-Treaty was well equipped with rules and regulations which help the developing countries. Yet big countries have found a loop-hole in the contract called patents and this means that technologies related to sustainability are not available or not affordable for developing countries.

I also joined the group of African Youth at the COP18, in which we discussed the problems of our varying countries and discovered that we have some common goals, such as not using sun power or not having a good public transport system or not having enough funding or help in the field of technology transfer. It was nice to come together as youth from one continent and discover we are all quite similar at heart. At the COP18 itself we met on a regular basis, even though only very shortly, and wrote a policy, with proposals for the KP, which we hoped the politicians might adopt.

We as part of YOUTHhinkgreen had the obligation/opportunity to talk with big decision makers and NGO Chairmen. We handed over our Green thread to remind them to keep thinking green and like a traffic light give the sign to really start working for a better future. We also joined in with some demonstrations and were interviewed often. 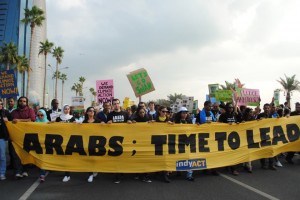 We also partook in a march, consisting of 1000 people all concerned for the environment and for COP18 to be a success. It was the first time that civil society groups had organized a climate march in the Middle East.
We also had the opportunity to visit the endangered Mangrove forests near Doha and visited the desert, which we found to our disappointment absolutely filled with garbage.

All in all we made our voice heard in COP18, yet if the politicians take youth seriously is another story. Yet it still was a very informative and life changing experience for the better. We hope that awareness of Climate Change is being spread across the entire world now and that Namibia’s youth will stand strong for a better future.

We would like to thank Youthinkgreen very much for this opportunity and the knowledge we have gained.