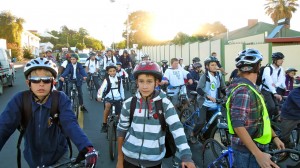 First EVER bike bus to DHPS

It was and is the wish of many DHPS students to go to school by bike, but many of them as well as their parents are scared because of safety reasons. The Bike-Bus is the solution to these concerns.
Experiences in other cities have shown that car drivers pay more attention to groups of cyclists than to individuals. We definitely noticed that. Car drivers willingly stopped and let us pass in front of their BIG open eyes 😉 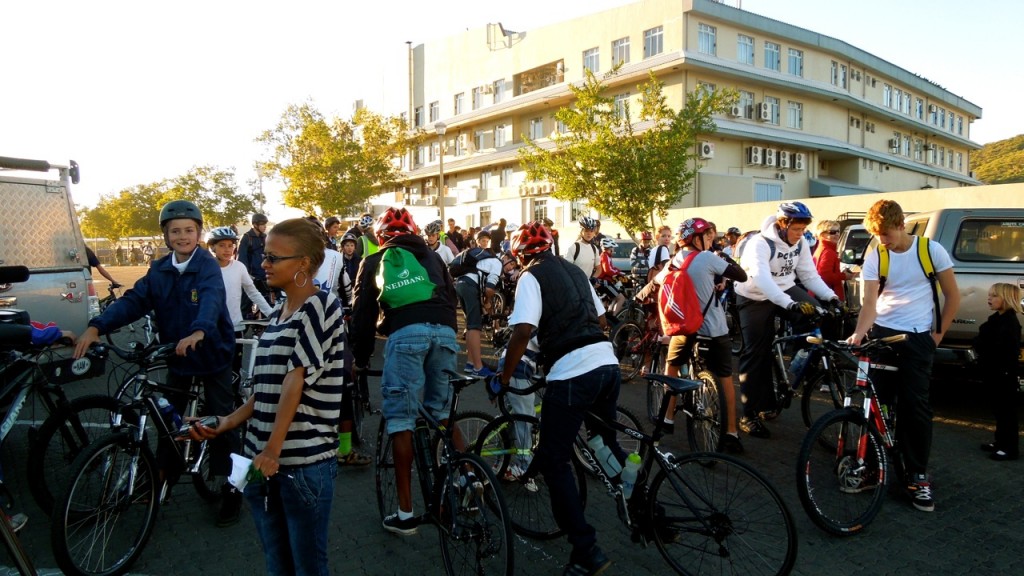 Early in the morning, at 6:30 we met at the Checkers car park behind Hidas Centre in Klein Windhoek. From there it was a short 2.9 km ride to school.

We rode our bicycles  together as a big group. In the front we had Alexander Brock and Simon Klippert, the mad cyclist who came from Uganda to Windhoek. At the rear end of the convoy we had the deputy head of school, Klaus Rennack, and Thorsten Horenburg ensuring the safety of all participants.

When we arrived at school we cycled through the big gate onto the school grounds.
The bicycles were parked along one side and a security guard kept an eye on them.

When school finished at 9:45 (it was the last day before the holidays) we all met again with our bikes in the school yard and then started the bike bus again to go back to Klein Windhoek.

It was fun to watch students showing off their cycling skills at school and during the ride, but it was also heartwarming to see some kids, who had obviously not ridden a bike very often before, struggle and fight to keep up with the others and the happiness on their faces when they finally arrived at the destination.

In the end all 65 participants agreed that this was a fantastic event that had to be repeated on a regular basis.
Nobody got hurt. There was no incidence with aggressive car drivers. It was over all just a great experience.

Everybody made it safely!

For more pictures of the event visit our photo album on Facebook.

To watch the news story that was shown on One Africa television, please click here.

Route which the bike bus is going to follow

You can check the route the bike bus took in more detail on Google maps.