On Thursday, 12th of July, our group had the honor to meet her Worship Mrs. Trepper, the Major of Windhoek.

The climate ambassadors reported to the Major about events and actions the group had already organised in Windhoek and invited her to this year’s green school bazaar. The Major accepted the invitation and promised to come if her schedule allowed it.

They  gave her a bracelet made of green thread, a symbol to remind her to “never lose the green thread” during decision making.

The Major also received a catalogue of claims. 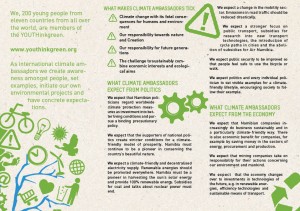 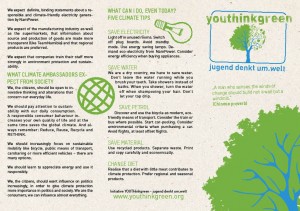 This catalogue includes a number of claims which are directed at large companies, industries and society but also at politicians in high positions. One of the claims directed to the politicians is, that they set visible examples for a climate friendly lifestyle, encouraging society to follow their example.

At the end of the meeting the Major invited the group to cold drinks and snacks.

For a video report about the meeting, please click here.