On the evening of 13 February 2013 the Namibia Environmental

Investment Fund celebrated its one year anniversary at the Windhoek Country Club. YouThinkGreen Namibia was invited to present at this auspicious event.
With great pleasure the invitation was accepted. Six students together with Mr. Antoni prepared and delivered a twenty minute speech which included informative photos and videos. 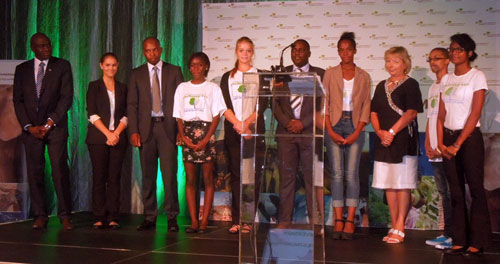 It was a great honor for the group to hand out green threads to all the members of the board of directors of the Fund as a reminder to never give up fighting for a green and sustainable future.
The presentation earned the group a lot of applause at the end and several people came to the students’ table and congratulated them on their achievements, goals and the general set-up of the project. 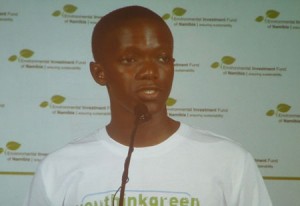 Ileni reading out a poem

Afterwards Ileni Hitula read out a poem to the audience. For his sincere delivery he received lots of applause from the audience and special recognition from the MC of the event.

As all the members of the group were invited guests, the students had their own table and enjoyed a three course dinner.

When the Hon. Minister of Environment and Tourism, Minister Uahekua Herunga, was about to leave the festivities, Tracy Hoxobes and Ileni Hitula took the opportunity to give him a green thread too. 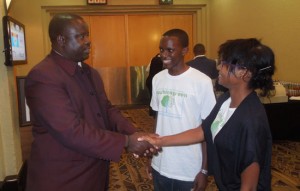 Tracy and Ileni hand over a green thread to Minister Herunga

At the end of the event the group was thrilled by the final announcement: As a thank you the fund had decided to give twenty new waste bins to DHPS to support the school’s recycling project to the value of N$ 11,000.

Now everybody in the group realised that the hard work and all the excitement before the presentation had been worth it.