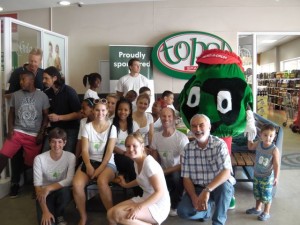 On Saturday 10 March, the YOUTHinkGreen group along with the FNB Global United FC 2012 Climate Kick and the Recycling Forum of Namibia (RNF) hosted an unpacking action at Super Spar. We were fully armed with lots of information and astounding facts to share with fellow consumers.

Basically this whole event was aimed to enlighten people about how to recycle properly and about unnecessary packaging. Did you know that 16% of the cost of a product is due to unnecessary packaging? Although packaging seems indispensable for various hygienic reasons, to reduce danger of theft and to be able to cheat us, the consumers, sometimes it is not really required. For example, let’s take toothpaste, it is already in a tube but yet manufacturers still see the need to put a box around it. Why? The box is totally uncalled for.

Furthermore envision this: For every calorie we eat, 100 calories of oil are used to produce, package, transport and refridgerate the product. During this process, how many greenhouse gases are emitted? Quite a lot I would say….

A recycling station was set up close to the entrance, where we than helped shoppers to unpack their groceries from plastic bags into re-usable cloth shopping bags. Whilst doing this, we removed all recyclable packaging materials such as cardboard and plastic from their groceries with their approval and sorted them into recycling bins.

Approaching the shoppers was not at all that easy, as most of them were either in a rush or basically just had no time to spare. There were some who were so friendly and eager to know more. They asked questions about things they were uncertain of and some of them bought recycling plastic bags in which to throw all their recyclable waste in. For those who had no time at the moment, we handed out pamphlets to read at a later stage.

All in all we would say this was a very successful event, which hopefully will be repeated at a later stage at a different shopping center. We collected about 200 plastic shopping bags, but as a substitute for recycling which would be great, we gave them back to Super Spar at the end of the day for management to re-use again.

To see more pictures of the unpack action, click here.