The students from Windhoek have realized several field projects at their school, so that DHPS is a leading example to all the other schools and also to the Namibian society.
Recycling started already in 2011 and is constantly improving. 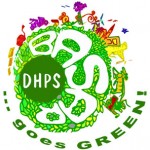 In the first project in 2012 we converted the annual school bazaar into a green bazaarwith the key aspects:

The second project tackled transport to and from school. Most of the students get to school by car. There’s no public transport system, except for two buses for a minority of students. The group developed a survey tool which allows  to calculate the current carbon footprint of the school’s transport mix.

In our third project we repaired a broken windmill to pump underground water for a small community in Damaraland.

Water is one of the most important and valuable resources in Namibia. The local windmill in !Ghaus, a small community in Damaraland, has been unusable since December 2011. After a herd of elephants had broken the existing retaining wall, both the windmill and the pump were badly damaged, thus a water conveyance has since been impossible. 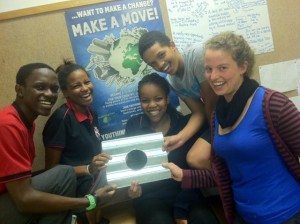 Since April 2014 the students of the group have started on a new exciting field project to save children’s lives and help the environment at the same time: Uyelele – the Namibian Solar Bottle Project. For more information, please continue reading here.

„A man who senses the winds of change should build not a wall but a windmill.“
(Chinese proverb)