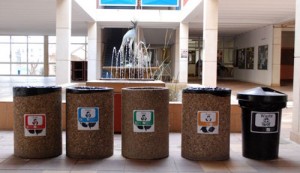 Recycling started at our school in February 2011when the environmental group signed the school up for the annual Schools Recycling Competition organized by Rent-A-Drum. 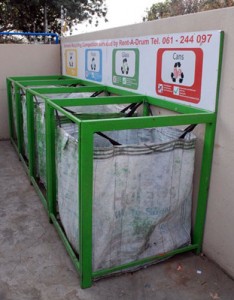 ed three separate bins: one each for plastic, paper and waste. In the school yard the dustbins were also re-arranged to form recycling stations.

At the end of 2011 the students at DHPS had collected about 11 tonnes of recyclables and finished the Schools Recycling Competition in 10th place earning earning the school about N$ 5000,-.

This year (2012) the DHPS is again participating in the competition. In July the YOUTHinkGreen group relabeled all the classroom bins with new stickers. 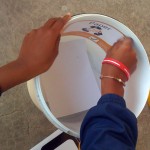 There had been complaints that the old labels were not distinct enough so that students often threw rubbish in the wrong bin because it needed too much effort to identify the right bin.

The administration also decided that one recycling station wasn’t enough. Therefore three more stations were purchased and distributed on the school grounds. This meant that now the whole school including hostel, kitchen, kindergarten and primary school started separating their rubbish. 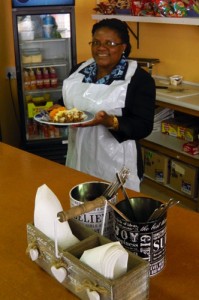 Recycling can only be the first step to actually reduce the rubbish at school. With this intention we introduced a change in our cafeteria in March 2012:
Usually school lunch was served from Mondays to Thursdays on disposable plastic plates with plastic cutlery. The YOUTHinkGreen group didn’t think much of such a waste. Therefore the kitchen of the hostel was persuaded to buy another 30 porcelain plates and proper metal cutlery.

Since April 2012 students at DHPS get a school lunch served on these plates with proper cutlery for a deposit of N$ 20,-.  Fears that because of the deposit the number of sold lunches would reduce were effectively unfounded. 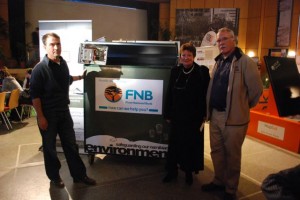 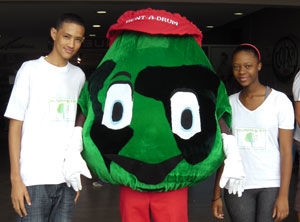 The results of the School Recycling Competition 2012/2013 have been published. The price giving ceremony took place on 19 March 2013 in Katutura.
The best school collected 40.9kg per student, the schools on second and third place a bit more than 20kg per student.
DHPS managed to raise 17.3 kg of recyclables per student and therefore finished in sixth place taking home N$ 4202.63 in price money.
Well done, but the school can do much better.

Thanks to the presentation that YouThinkGreen Namibia gave at the anniversary celebrations of the Namibia Environmental Investment Fund, the school was given another twenty new waste bins worth N$ 11,000.- for its school grounds. As soon as these new bins have been labelled and assembled to nice recycling stations all over the school grounds, everybody at school will be able to separate waste and therefore increase the amount of recyclables collected at our school.