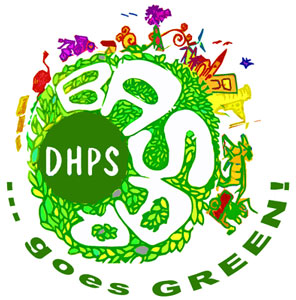 This year’s bazaar took place on August 17. Due to the input of the YOUTHinkGreen group it was a ‘Green Bazaar’ with the key aspects:

OneAfrica TV reported about the bazaar on their evening news. To watch their report click here.

To see more pictures of the bazaar, please click here.

In order to advertise and promote the green idea, members of YOUTHinkGreen Namibia had been designing new bazaar logos.
In the end it was the design of Nandi Merdes, that got chosen to promote this year’s green DHPS Bazaar!

Here are Nandi’s thoughts about the design of the new logo: 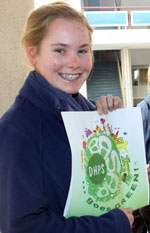 How did we realize and put into action the key aspects of this year’s green bazaar?

Like every year each pupils and parents had prepared a day of entertainment for the whole family! Like every year there were stalls with games to play especially for the enjoyment of the younger generation. No one went hungry: cakes at the coffee corner, steak rolls, braaivleis and many more culinary delights were on offer.

Great decoration and stalls made from 'recyclables'

The only difference this year was that all stalls were asked to produce as little rubbish as possible, e.g. by reusing paper from magazines for decoration or organizing second hand toys for prizes instead of plastic rubbish from Chinatown.
When walking around the bazaar we saw that a lot of stalls had taken this advice to heart. We saw food being sold on banana leafs and lots of decoration being produced from recyclables. 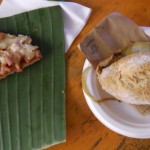 In order to lessen the amount of rubbish the YOUTHinkGreen group had been able to convince the organizing committee of the bazaar to exchange the use of one-way cutlery, paper plates and paper cups with compostable crockery and plates. This was the first time in Namibia that such compostable crockery was used for a public event of this size. 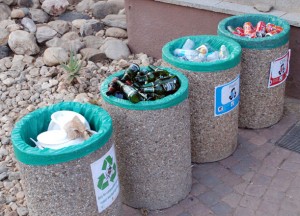 We also appealed to the visitors to “Think green” and sort their waste by using the different waste bins that had been arranged to recycling stations all over the school grounds.
This was a roller-coaster of success during the day. When we first thought in the early afternoon that it’s never going to work out, we noticed that by the end of the day most recycling containers were filled in an exemplary way.
In total 1180kg of recyclables were collected during the bazaar (boxes/plastic: 60kg, glass: 800kg, mixed recyclables: 320kg).

Thanks to the Namibian Organic Association the school was able to purchase all the side dishes of the great braai from licensed organic farmers. The rest of the food was produced by local farmers. 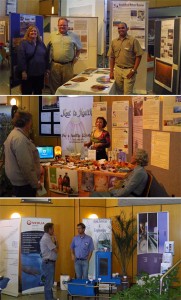 At the Green Fair we wanted to give local businesses the opportunity to show off their green products with the intention that the bazaar’s visitors realize how to make a change in their own life-style towards a more sustainable living.
Therefore the school’s assembly hall was turned into an exciting, green exhibition hall which was open from 13:00 until 19:00.

At the Green Fair were representatives from the following industries.

We also had a stand with two independent consultants who were able to answer any question the visitors had concerning sustainability independently. 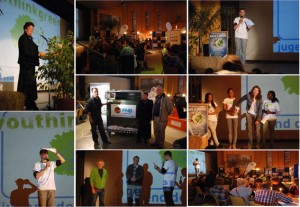 After the ‘Green Fair’ an eco pub-quiz with the Deacon (a famous local radio DJ) took place in the assembly hall as part of the bazaar’s evening entertainment.

The aim of the quiz was to create awareness for our key topics sustainable energy, transport and consumption. Young and old sat together at tables and tried to find the right answers for the twelve questions for each of the three topics prepared by the YOUTHinkGreen group and the Deacon.

At the end of each round as well as for the over-all winner great prizes were won. 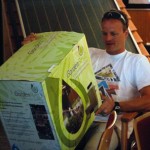 Thanks to the support from local companies we were able to give away two off-grid solar power plants from SolarAge and HopSol, one 200l solar geyser from SolSquare, one grey-water system from Water Conservation, four baskets of organic cosmetics from !Nara and Root to Health, three water analysis from Aqua Services as well as a box of wine from LoriInk.

All in all the quiz was a big success and we think a lot of people starting thinking about issues they hadn’t been aware of before.

Through the nominal participation fee of N$ 20.- per person as well as the sale of raffle tickets for some of the prizes YOUTHinkgGreen Namibia managed to collect funds for the school worth N$ 8000,-!