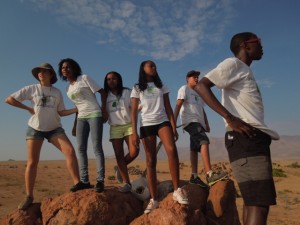 Our team for the task at hand - YTG Namibia

On the 14th – 17th February 2013, seven members of the Youth Think Green Namibia group, together with the head, Mr. Carsten Antoni, and a camera team from Germany, who were shooting a documentary about our project, left Windhoek. The group set off to !Gaus, a small settlement in the Brandberg mountains, to repair a windmill that had been trampled down by a herd of elephants.

On Thursday, the 14th of February, yes Valentine’s Day, we woke up early and began our voyage to !Ghaus. To be honest none of us knew where we were going, the drivers did of course. We drove for what seemed to be an eternity and finally reached our destination, the White Lady Lodge, at about 5pm. We had a short meeting with Mr. Gert Keding, who coordinated and organised the actual repair work, and all the other people who were part of the project. This is where we got the ultimate surprise…the head of the community had decided without warning to install a DIESEL pump instead of repairing the damaged windmill! This caused much confusion. How would the residents be able to afford to pay for the diesel in a community where more than half of the people are unemployed and depend on their monthly grants from the government? Who would maintain the pump? All these questions arose, but no one could answer them. We were also taken aback when we were informed that the head of the windmill, which had been lying about for sixteen months, had been removed and was being held in storage by the Ministry of Agriculture, Water and Forestry in Karibib and would not be released without the approval of the chief of the community. Shocked by the news we decided to start straight away with writing a letter to the head of the community as well as a letter to Mr. Usurua, the Regional Manager of the Ministry of Agriculture, Water and Forestry in Karibib.

After these tasks were finished it was time to set up our tents, which wasn’t easy. In the end everybody managed, although some were standing straight and others were tilted. Nonetheless, we slept quite peacefully and woke up the following morning with fresh minds and energy, ready for work. 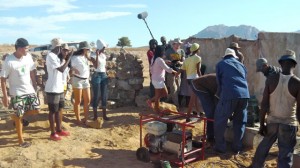 What a shock! Men are busy installing a diesel pump

As we were arriving at the windmill site, there were already men, busy at work installing a  diesel pump. We spoke to them and informed them that it would not be necessary to continue with their work as we had come to put up the windmill. Naturally they could not stop without direct orders from their boss. The community was absolutely devastated about the prospect. Yet they were completely and utterly grateful that we had come to help, so that our mission seemed way more important than it had ever been before. We set back home dedicated to do what was good for the village and the environment. So we did what we came to do and began to take out the old concrete foundations in order to pour the new ones. As only a few people could do that job, others painted the windmill tower. Once the paint was dry, we all wrote a little message on the tower, which the locals can read every time they will come to get water. 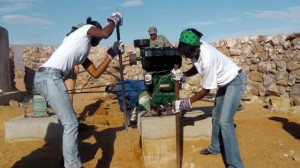 Sonia and Tracy hard at work

This was real physical work that lasted all morning luckily a few villagers joined in, too. Meanwhile Tracy and Ileni drove with Mr. Antoni to Uis to get the written permission from the local chief of the community to start re-building the windmill. By pure luck it happened that the local chief, Mr. Elias Thaniseb was in town. After lots of talking in Damara the group was finally successful. In his office Mr. Thaniseb signed the letter. From the office of the White Lady Bed and Breakfast it was emailed immediately to Mr. Usurua at the Ministry in Karibib. Afterwards the ‘delegation’ went back to !Gaus. The whole group reunited for lunch at the White Lady Lodge as it was too hot to work in the mid day heat. 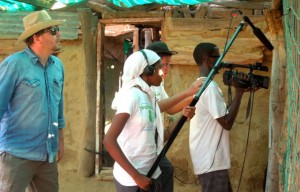 As soon as it cooled down a bit the group started shooting Undji’s advertisement ‘The angry farmer’. This short film was shot in a villager’s home. One of the men in the community acted as Undji’s father in the film. This short commercial for the environment was about a father and a daughter coming up with the idea of giving the elephants a drinking hole, so that the elephants don’t trample on the windmill. Since this was our project we had to do it on our own. The script was developed by Undji Usurua in one of our film workshops and the camera crew consisted of students. Keeping in mind that none of us had ever shot a commercial before, we were a tad bit nervous, but soon got the hang of it and shot all the scenes.
This was a fun and very educating experience, especially for our lead actress Undji who had to learn her lines in Damara right before shooting. All the cutting will be done by our film experts and might be seen on National Television in the near future.

In the evening we celebrated Tracy’s 17th birthday. It was a big surprise when the kitchen crew came into the dining room singing with cupcakes in their hands.

The following day was the most tiring of all. It was the day we had to elephant-proof the windmill. That meant we had to collect sharp stones and place them in a 3-4 m radius around the windmill walls. As elephants, as big and mighty they are, are afraid of pointy objects, we hoped they would steer clear of the windmill this time. In the heat we had to load hundreds of thousands of rocks and boulders onto the trailer and place them carefully around the designated area. This was extremely tiring, but we definitely grew stronger as a group. 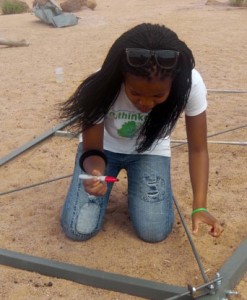 Jennifer is about to leave her message on the new tower

In the afternoon we all wrote a little messages on the tower, which the locals could read every time they would come to get water.

Then, at the end of the day, it was finally time to pull the new tower up. Everyone including the locals pitched in and the tower was up and standing in no time. It was an amazing feeling to see it standing straight. Quickly the new concrete foundations had to be laid and the work for the day was done!

You could say everything was done, but some essential parts of the windmill were still missing: the head and the rotor blades of the windmill. We did everything in our power to contact Mr. Usurua, the regional manager at the ministry in Karibib. Eventually the next day (our last day) after many phone calls and text messages, we managed to get in touch with him and convinced him that Wind power was the only solution for the water problems of !Gaus. He said he could only let the rotor and blades go on the following Monday and let slip that the rotor had been completely taken apart! What a disaster and disappointment! The mood was somber and tense! We had to leave that same day and now it was sure that we weren’t able to finish the windmill. 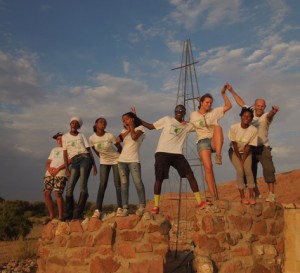 The morning of our last day (Sunday) was used to shoot the last scene of Undji’s commercial and we were filmed by the documentary team from Berlin as we were standing on the surrounding walls of the windmill. After lunch we had to start our journey back to Windhoek.

As much as we would have loved to stay longer and finish what we had started, all odds were against us. The locals were very thankful for what we had done for them so far and we re-assured them that we would be back to see them again once the rotor arrived and everything was completed.
In the end Gert Keding took it upon himself to stay in touch with Mr. Usurua and to organise that the rotor will come back to !Gaus and be put back on top of the windmill. We’ll keep you updated on this website about the progress!

Damaraland was definitely a (rotor)-coaster ride. Sad, happy, frustration, tension and even some tears were shed, but we survived it all. In the end it proved to be worth more than we expected. And on our last day there, we even got the opportunity to see a real life elephant!! But that’s another story…

We will always be thankful to the YouThinkGreen leaders and Mr. Christoph Poth, whose financial support only made it possible for us to go!

Thank you very much!

For more pictures of this trip visit our photo album on facebook.