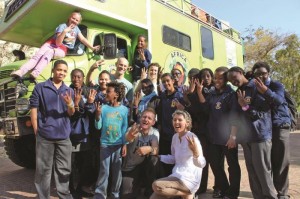 Don't Be A Waster! YTG students with the Sampson family.

Africa Clockwise  is a phrase that everyone should learn to know and respect. On the 17th of July, we, the members of Youthinkgreen-Namibia, had the pleasure to meet up with well-known South African comedian Mark Sampson, his family and their very large green (in ecology and color) truck. These intrepid explorers are on their way around Africa using only alternative fuel and by doing so are on their way to a new world record.  Their trip should last two years: one year traveling up the west side of Africa and then one year traveling down along the eastern side.
In front of our school hall the green colossus loomed, casting its shadow on the Youthinkgreen-Namibia group, all of whom were eager to listen to Mark and his family. Mark and family immediately jumped in and started describing their plans and what exactly made their truck so environmentally friendly.
Firstly, as mentioned, they are doing it to break a world record, but secondly and more importantly to show the world that it is possible to travel by alternative means and to prove that Africa can show the world how to cope with climate change. On another note they wish to discover whether it is possible, in this century, for a kid to live happily without a TV or water on tap.
They were keen to talk about the workings of the Big Green Truck, which once had been a Mercedes 911 bullnose gun-tractor, pulling heavy artillery weaponry through Angola. Mark mentioned that when they had bought the truck two years ago it still had had a gun turret attached to it, which with the renovations had been exchanged for beds for the children. Of course these weren’t the only changes. The interior has been completely redesigned and is now a comfortable “small home”, fully equipped to function as kitchen, lounge, bathroom and/or bedroom.

The main conversion happened with the motor though, transforming the old diesel motor into a motor that runs on waste vegetable oil, from fish and chip shops for instance. The family told us that they had received old cooking oil from Joe’s Beerhouse here in Namibia, which we thoroughly support and admire. Yet the oil, which in Namibia would have gone straight into the landfill and thus be no use to anybody, has to be processed before it is capable of powering the Big Green Truck.
Once every top up of oil, the family has to spend a good few hours filtering the oil so that all impurities are gone thus not harming the engine. Firstly the oil is filtered through baskets lined with the same type of cloth used in making cheese; the oil is then pumped through numerous string filters. The oil is then filled into barrels and stored on the roof or in the mighty fuel tanks of the truck; making it possible, to our great admiration, for the truck to drive from Cape Town all the way to Windhoek without having to obtain more oil.
Their electricity is generated with photovoltaic solar panels, which of course is the logical and sensible source when traveling around Africa.
The Sampson family then showed us the sign they use when they see people distinctly doing something environmentally unfriendly; which is by using ones three middle fingers and pointing them upwards one forms a “W” which stands for the word “waster”. This sign one can casually show an offending person and leave them feeling flummoxed, but with a sense of shame.

Youthinkgreen Namibia is incredibly honored to have had the chance to get to know this inspiring family and their Big Green Truck and wishes them a safe and fulfilling onward journey.

You also find a short report about the visit on The Republikein’s website.