A crucial part of YouThinkGreen is the creative use of media. Within today’s internet era, the medium film/video is the central medium of communication and expression. Therefore film workshops and intense screenplay work are an important part of the project.

At the end of June the first film workshop with the German director Thomas Frick (http://www.frickfilm.de/) took place in Windhoek. 23 students worked hard from Thursday to Sunday (from 07:00 until 16:00 each day) to develop their film exposes, treatments and mood scripts which were then shot and edited by the students in small groups.
To see the results of the first film exercises of the group, please click here.

The students enjoyed the workshop although most of it took place during their weekend:

„A fun and interesting way to save the environment with lots of laughing.“ (Oluchi Nwagboso) 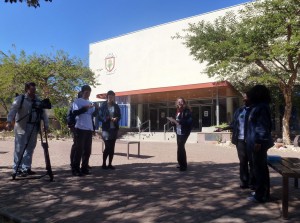 Students during film exercise at the film workshop.

The aim of the film workshops is to provide the students with knowledge to achieve design, media and communication skills through practice. A crucial element of this practice is to come up with ideas for a film spot regarding the topics climate change and sustainability taking into account the key aspects consumption, energy/resources and mobility. With the help of professional instruction and equipment, the best film ideas will be shot during the consolidation workshop about six months after the first film workshop. The students are asked to give free reins to their creativity. The focal point is to shoot innovative spots with a clear message with reference to the project topics as well as to global and local problems.

At the beginning of 2013 two scripts developed by students from YouThinkGreen Namibia were selected by a jury in Germany to be realised. ‘The angry Farmer’ and ‘Spot the difference’ were shot in February 2013 in Namibia by students.

The film spots were made accessible for the broad public for the first time at the First World Youth Sustainability Summit in Berlin (10 – 20 May 2013).
Afterwards they’ll be shown through internet channels, film festivals and local media partners.