Along with different members of the jury, the sponsors and organisers of YouThinkGreen  went through 500 film ideas developed by students from all thirteen YouThinkGreen Schools all over the world. After a first selection of 70 ideas, the 30 best ones were selected. 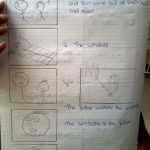 One page of the script 'The angry Farmer'

The film Script ‘The angry farmer‘ by Undji Usurua was selected amongst those 30 best scripts. It was realised in February in !Ghaus, a small community in Damaraland which we visited to repair a broken windmill.

The spot was shot in a villager’s home. One of the men in the community acted as Undji’s father in the film. The spot is about a father and a daughter coming up with the idea of giving the elephants a drinking hole, so that the elephants don’t trample down their windmill. Since this was a student project it had to be realised by students. Undji 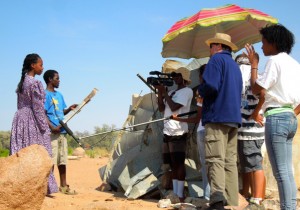 The film set of 'The angry Farmer'

acted in her own spot and the camera crew consisted of three students. Keeping in mind that none of them had ever shot a commercial before, they were a tad bit nervous, but soon got the hang of it and shot all the scenes.
This was a fun and very educating experience, especially for the lead actress Undji who had to learn her lines in Damara right before shooting.
Click here to watch the final spot.

The Cheetah-Spot ‘Spot the Difference‘ by Petelina Frans was also shot in February as a by-product of the documentary about YouThinkGreen Namibia.

As the location of the spot the Avis dam in Windhoek was chosen. A worker of Janice Lohmann’s  farm was chosen as the protagonist. He played a tourist guide who jumps into a cheetah suit to give a tourist (played by Thomas Frick) the satisfaction of spotting a ‘real’ cheetah in the wild. 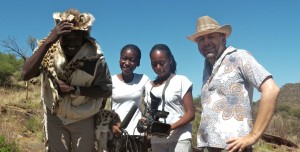 The film crew for 'Spot the difference'

Petelina Frans and Undji Usurua worked behind the camera and made sure that the sound was right. Although the spot was filmed on a Saturday morning, it was an exciting experience for everybody involved.
Click here to watch the final spot.

The rough cuts for both spots were done by our film experts Hatago Priebe and Ileni Hitula. The final cuts will be presented to a broad audience during the World Youth Summit on Climate Change in Berlin (10 – 20 May 2013). Afterwards they might be seen on National Television in Namibia.